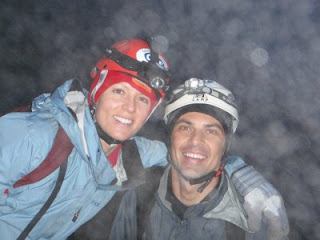 The alarm goes off at 1:ooam and the difficult task of crawling out of the warm sleeping bag begins. The few articles of dry clothing are already on, headlamps on the helmets and climbing harnesses are secured tightly. After a quick breakfast and final preparations, we left Base Camp at 2:30am. Approximately one hour later, we reach the first of many (at least 20) sets of fixed lines. My headlamp pierces the darkness above to reveal the near vertical pitch we are expected to scale. After a careful scan for available handholds, I quickly realized that "The Claw" would be in order here and attached it over my right glove. Next I clipped my ascender to the rope, attached my safety line and started climbing. Higher up, some up of the handholds were few and far between so The Claw turned out to be a big help. Despite the unsophisticated manufacturing technique, The Claw performed without failure. The rock was very sharp, like nothing we had ever seen before and this was a blessing as well as a curse. Great for handholds and The Claw but bad for clothing and flesh. As we got into a rhythm, we racked up the vertical feet and reached the summit ridge just as daylight was illuminating the thick cloud cover surrounding us (foreshadow of weather in store for us). 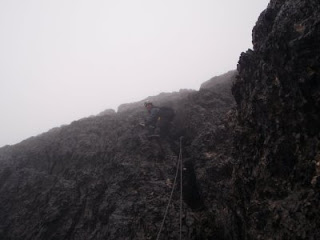 Not long after we came to the feared "Tyrolean Traverse". Just like the opening scene from the movie Cliffhanger, we stared at the ropes spanning the void of 75 feet or so above a massive drop that would result in certain death if the ropes or our harness failed. Fortunately, there were four ropes set by previous teams so the odds of a successful crossing were greatly improved. But who was to go first to test them out? Poxi, our guide and cook (most valuable member of the team) clipped his locking carabiner to the four ice-encrusted lines and began to pull himself across hanging from the ropes as the ice broke off which created an impressive spraying effect. After safely reaching the other side, the rest of us followed with varying degrees of grace & confidence. I never knew that our sweet Polish friend Ania had such an extensive vocabulary of American curse words....and she made full use of them before, during and even after the famed "traverse".


We encountered a few more "gaps" that required a prayer and a leap from one rock to another above drops of several thousand feet (all with our safety lines attached Mom!). And finally, the summit peak was in view and at approximately 9:00am we stood atop the highest peak of the continent of Oceania! Paul - While rappelling down in snow and rain (wet ropes don't slide through a Figure 8 nearly as smoothly as dry ropes) smacked right elbow against sharp rock wall. Sliced open large v-shaped flap of meat soaking entire right sleeve with blood. Should have required stitches but given our remote location it was not an option.
Posted by pfejtek at 8:15 PM No comments:

Welcome to the Jungle 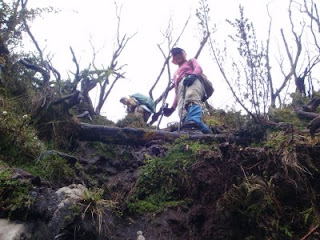 For six long days, mud, rain, entangling tree roots & hanging vines, steep slopes, and angry rivers all conspired against us to impede our progress towards base camp. We are travelling a new route from the north pioneered earlier this year by our guides who pieced together several long-abandoned tribal hunting routes. Our entourage includes 30+ porters from the local Moni tribe, those with machetes in front helping to thin the dense jungle growth. Only 13 non-tribal people from the civilized world have ever set foot along this route (all of them climbers). We felt privileged to be travelling through these remote areas and villages where the children have never seen white people, let alone digital cameras with instant images & videos of themselves! I'm sure they'll be talking about the "white magicians" for months! 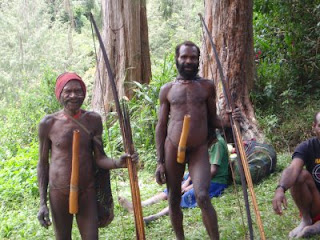 These experiences made our daily forced march to Base Camp almost bearable. For nearly a week, our routine consisted of powering ourselves up, down and through the most difficult terrain we have ever experienced. Once we accepted the fact that our super dry Gore-tex outerwear was useless against the incessant rain; and that the leach-inhabited mud puddles could swallow your leg up to your knee without notice, we simply laughed about our current reality.....it was either that or cry. After 8-9 hours we would reach camp and collapse, exhausted into our tents. We re-fueled with as many calories (carbs mostly) as possible in order get up before 6:00am and be ready to slide our feet back in to our wet, muddy boots to repeat the entire process once again. On Tuesday afternoon September 23rd, we finally arrived in to Base Camp at approximately 13,800 feet and tried not to think about the misery of re-tracing our steps on the return trip. Now it was time to take a day of rest, wash some rancid smelling clothes by the scenic lake and prepare for our summit attempt. 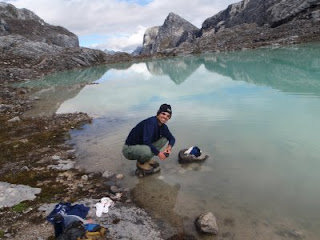 Injury Report From the jungle:
Denise - Various bruises & scrapes on all four limbs, including a bruised ego. Right knee is holding up pretty well (thankfully). Bump on head from log falling on top during tent erection process.
Paul - Deep gouge on left shin inflicted by sharp and slippery rock while crossing river. Pain with massive swelling & bruising to follow. Also, bumps and cut on head in separate accident.

Typhoon in Taiwan Nearly Ends Expedition Before it Starts

When travelling to remote destinations around the world to climb mountains, we have become quite accustomed to unknown variables changing our plans. However, when China Airlines called to notify us that all flights to and from Taipei had been cancelled due to a typhoon, we had no idea the domino effect this would cause. We also had no idea that the local guiding service in Indonesia had booked four other climbers onto what we believed to be a private climb for Denise, myself and our Polish friend Ania. Because of our delay, they told us they were leaving without us! After an Amazing Race-style scramble to get to Jakarta and then to Timika some other way, we managed to get there only one day later than planned. Nonetheless, the previously scheduled bush plane with Ania and the other four had already left! Included among them were two other climbers that have already summitted Mt. Everest and a woman who is attempting to be the first Mexican citizen to climb all seven summits. We suspected that the guiding service was more interested in the publicity that would be generated by getting these climbers up the mountain, rather than accommodating us!

Well, we planned, trained, and put a lot of energy into this quest for #5, so despite this heartbreaking setback we weren't about to give up on the Seven Summits for CAF dream....besides we have a growing number of supporters/CAF donors that are pulling for us! We decided we would charter a bush plane ourselves for $3,000 to fly us to the remote jungle airstrip where we could catch up with the expedition. Fortunately, and with the help of Adventure Indonesia, some cargo was arranged to fly with us bringing the cost down slightly. When the Twin Otter landed on the tiny dirt airstrip, we were thrilled to be greeted by the entire tribal village of Sugapa and other members of the group, including our good friend Ania. The arrival of a plane in this village is an infrequent occurrence and met with great enthusiasm ~ we felt like big-time celebrities stepping out of the equivalent of Air Force One. Now we were back in the game and ready to start the expedition! 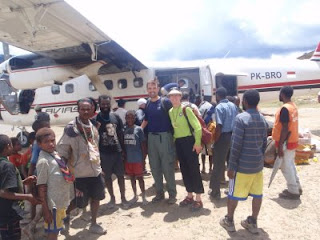 Posted by pfejtek at 6:50 PM No comments: