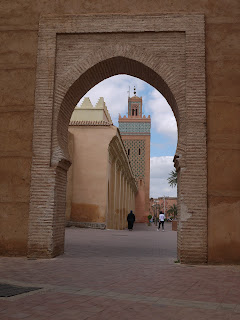 After our "Top to Bottom" tour of Jordan, we headed west to a country that we have wanted to visit for years - Morocco!  We arrived in Marrakesh on May 23rd and have spent the past week enchanted by the Arab and Berber people and their exotic kingdom.  The main square of Marrakesh is called Jemaa el Fna and is a circus-like atmosphere complete with snake charmers, acrobats, storytellers and a large souk similar to what we experienced a few years ago in Istanbul at the Grand Bazaar.  After 2 1/2 days exploring the city and sampling the Moroccan cuisine, we headed south towards the High Atlas Mountains and our objective, the 13,671 foot Jbel Toubkal, the highest peak in Morocco as well as the highest in North Africa. 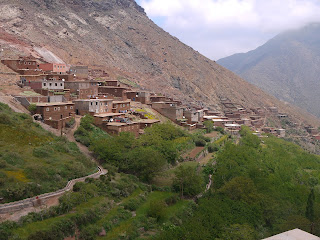 We met our guides Mohammed and Omar in the tiny village of Aguersioual and began our trek at 5,280 feet. After 7 1/2 hours taking in the sights and mountain villages along the trail, we reached the refuge beyond Tizi Oussem at 7,425' and spent the night. 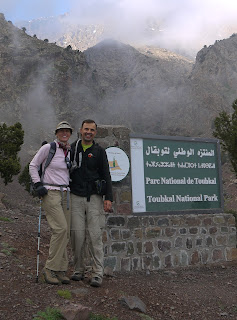 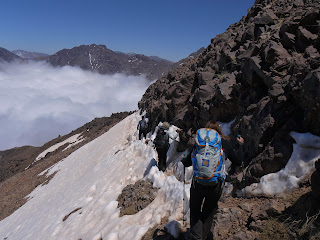 Early the next morning we were treated to views of several beautiful waterfalls and later tormented by 99 switchbacks painstakingly taking us up to the Tizi Aguelzim Pass at 12,045 feet.  It was here where we caught our first glimpse of Jbel Toubkal and then began our descent into the valley down to ~10,500 feet.  We arrived at our campsite near the
Toubkal Refuge approx. 9 1/2 hours after our trek for the day began and just as the afternoon clouds arrived as well. 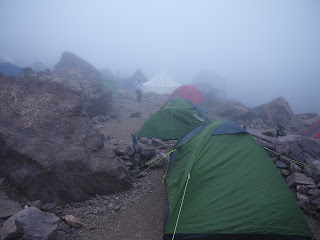 At 3:30 AM on day three of our trek, our alarm woke us signaling the start of a long and taxing day.  Along with our headlamps the stars and moon illuminated our route.   A cool breeze motivated us to keep moving upwards toward the point where the rays of the sun finally reached us and began to warm our chilled bodies.

We eventually reached the summit of Jbel Toubkal just after 9:15 AM on Memorial Day in the U.S. Mon. May 28th.  We proudly raised our Challenged Athletes Foundation banner after high fives all around with our team for a successful summit of the highest peak in Morocco! 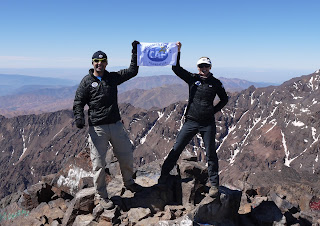 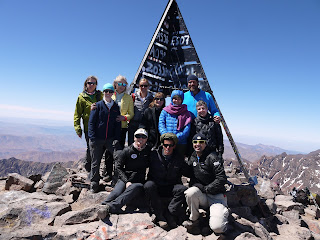 The hike back down to basecamp and eventually to the village of Imlil totaled a bone jarring and muscle numbing vertical descent of over 8,000 feet.  By the time we reached our hotel for the night we had been on the move for more than 15 hours and were ready for a long overdue shower and a return to sleeping in a bed.  As tired and depleted as we felt, it made us appreciate the strength and fortitude of our guides Mohammed and Omar who were fasting from sunrise to sunset the entire trip as Ramadan continues.  Yet again traveling to a new country as unique as Morocco and experiencing this adventure has broadened our horizons and reinforced our gratitude for our freedom and ability to explore mountains around the world to support the mission of CAF. 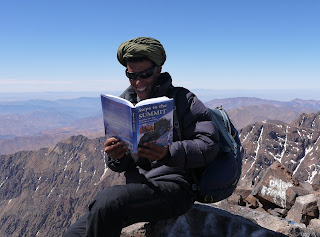 Jordan - From the Top to the Bottom 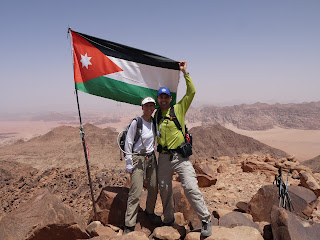 Checking in from Amman with a report on our past week of exploring the fascinating landscape of Jordan.  We reached the highest point in the country, the 6,083' summit of Jamal Umm ad Dami near the northern border of Saudi Arabia, and also visited the lowest point on Earth, the Dead Sea.  In between has been an absolutely incredible tour of the entire length of Jordan hitting the ancient city of Petra, the adrenaline inducing gorge of Wadi Mujib, the Martian-like desert of Wadi Rum, and all the way south to the city of Aqaba to swim in the Red Sea.  And all of this was during Ramadan, as the month-long Muslim ritual of fasting from sunrise to sunset began the day before we arrived in Jordan.  Suffice it to say we did not participate in this tradition but it made for an interesting cultural experience, particularly as our guides, drivers, and the vast majority of this Middle Eastern population did not eat or take a sip of water all day in the hot sun with daytime temperatures never dropping below 90 degrees F.
Extreme buoyancy floating in the salt and mineral dense water of the Dead Sea. At 1,385 feet BELOW sea level the increased atmospheric pressure is like have an extra 15% oxygen with every breath.  Less than 10 miles across the water is the West Bank of Israel. 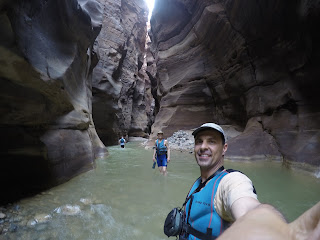 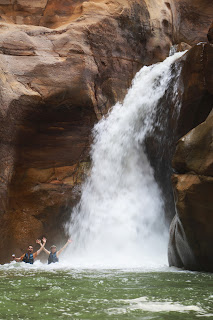 Venturing upstream into the deep gorge of Wadi Mujib was a spectacular geological sight wrapped into a fun and exciting experience unlike anything we have ever done before.  We spent 2 1/2 hours trekking, climbing over boulders and up waterfalls, swimming against swift river currents and pulling our body weight with the aid of ropes.  We were rewarded with a massaging shower under a beautiful waterfall and a
return journey back downstream floating and even launching ourselves off the end of a smoothed natural rock slide into a cool deep pool. 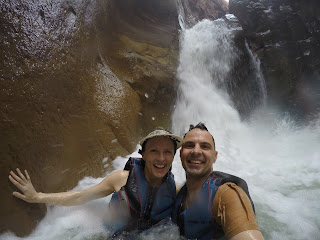 To fully appreciate Jordan you MUST partake in this Wadi Mujib adventure.  Thank you to John Parmentier for adding this to our itinerary and especially for inviting us to join you in Jordan in the first place and extending to us the immense hospitality of Aram Rabadi and his family to stay in their home and get a full immersion into Jordanian life. 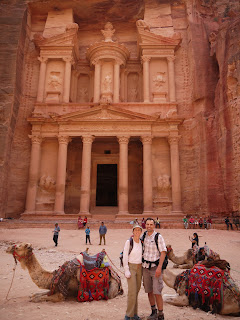 The ancient and once lost civilization of Petra was the main allure of visiting Jordan,
and it did not disappoint.  Carved into the side of a massive sandstone rock wall, the tomb known as the "Treasury" was a jaw dropping sight to behold.  Most recognize it
from the Indiana Jones movie "Last Crusade" and the three of us even rode out by horseback emulating Harrison Ford! 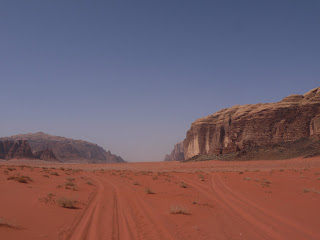 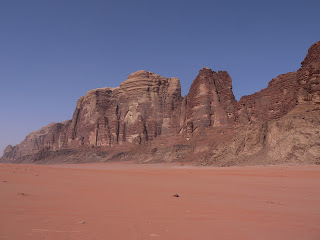 From Petra we continued south and east into the unique red desert of Wadi Rum.  More than 12 popular movies have been filmed here including the classic 1962 award winner "Lawrence of Arabia", and the more recent Mars movies including the 2015 blockbuster "The Martian" starring Matt Damon.  Both of these were shot almost
entirely in Wadi Rum. 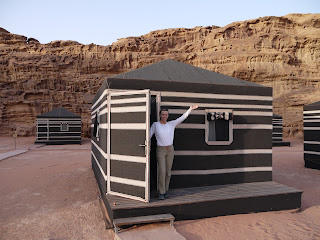 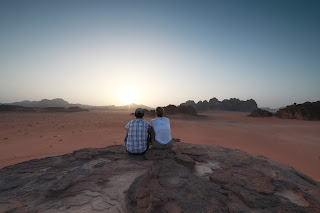 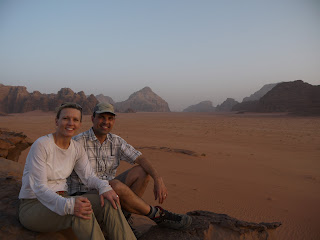 We arrived in our Bedouin camp just in time to witness a breathtaking sunset over the "Martian" landscape and were then treated to a traditional Bedouin feast of lamb and other meats cooked underground to a tender and tasty perfection.

The fuel and rest were definitely needed for our adventures that began early the following morning.  There was a small mix up between our van driver Mahmoud and our climbing guide Abdullah that necessitated taking the van a short distance across the desert.  The moment we began sliding and sinking in the soft sand, we knew we were entering a situation in which a phone call to AAA could not possibly resolve.  John, Denise and I began digging and pushing in the hot morning sun while our calorie-starved fasting Mahmoud hopelessly spun the wheels in the sand only to submerge our van even deeper. 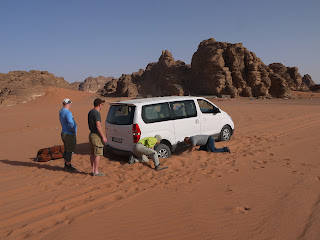 We toiled away at this for about 45 mins until Abdullah finally showed up in his 4X4 Landcruiser.  The start of our intended adventure to climb the highest mountain in Jordan, was now well behind schedule and the blazing heat of the sun was quickly intensifying.  An hour drive across the desert without a single sole in sight, along with a few unnervingly similar episodes of our 4X4 getting temporarily stuck, finally brought us at 10 AM to the base of our objective: Jabal Umm ad Dami, the highest mountain in Jordan. 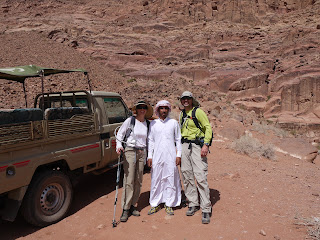 Other than the heat, the climb itself was not difficult, involving some scrambling/bouldering but no need for ropes.  Having Abdullah along to show us the route was extremely valuable, but half way up he announced he would go no farther.  Because of Ramadan he was fasting and had not drank one sip of water all day in the punishing heat approaching 100 degrees F.  He pointed us towards the summit and attempted to explain the direction of the route.  Abdullah was bound for some rest in the sparse shade of a large rock, and we were bound for the top! 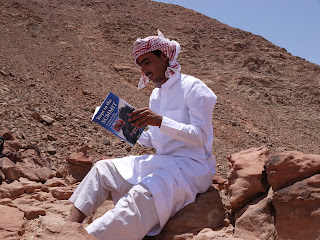 We were thankful for the ability to stay hydrated and on trail to eventually reach the summit by mid-day.  The views from the top and into the Saudi Arabian desert were fantastic and yet so foreign to us compared to the snow and ice capped peaks we are more accustomed to climbing.

We retraced our steps back down the mountain and across the Martian landscape to rejoin Mahmoud and our van (now freed from its sandy trap).  At this point we changed our plans and opted to make a shorter drive to spend the night in the seaport city of Aqaba.  After a long and hot day in Wadi Rum, the allure of a swim in the Red Sea was too tempting to pass up.  It was well worth it and much to our surprise the waters of the Gulf of Aqaba were significantly cooler than our dip in the Dead Sea two days prior. 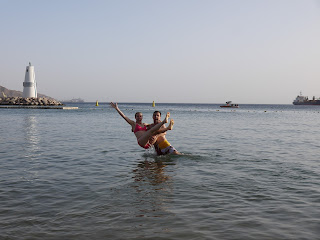 All in all we cannot say enough positive things about our time in Jordan and the good people who were kind enough to show us their beautiful country.
Posted by pfejtek at 4:24 PM 1 comment: