Of all the interesting places we have experienced while climbing in the far reaches of the seven continents, I would have to admit that Doğubayazıt and the region surrounding Mt. Ararat has made us feel the most "on edge" from a cultural "unease" perspective. (Even more so than the battle-hardened Kashmir region in northern India bordering Pakistan.) Denise and I were easy to pick out of the crowd walking down the main street in town among the 95% plus bearded men and the occasional woman in traditional Kurdish attire with a "tesettür" head dress and overcoat. If you were to sling a Russian Kalashnikov rifle over the shoulder of any one of these men, a Hollywood producer would be thrilled to cast them in the character of an Al Qaeda member in their next action movie. This would include Mustafa, our Kurdish mountain guide who we met Saturday morning and who spoke absolutely zero English. However, as soon a smile cracked through his hardened exterior, you could tell he was a kindhearted and caring man. Since we spoke zero Kurdish and a similar amount of Turkish, our communication with Mustafa was extremely limited as we began our Ararat adventure. 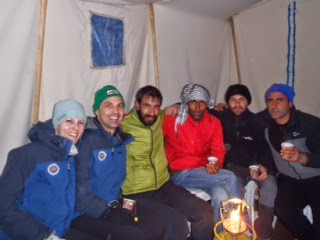 Our food and climbing gear was loaded on to pack horses at the trailhead at 7,770 feet and a short two hours later we arrived at our first camp at just over 10,000 feet.  Communications improved later that afternoon once Hazal, the operator of the expedition company Ararat Adventures, arrived at camp. Originally from Poland (with a given name of Agnieska) Hazal quit her job working as a tax accountant for the Polish Ministry of Finance after vacationing near Ararat and falling in love and marrying a Kurdish mountain guide named Safet.

The next day was another short, easy hike up to our second camp at 11,500 feet. We would have preferred to go higher, thus making our summit day shorter, but due to the early time of year and the amount of snow, our camp was located at this lower altitude.

Our time on the mountain was immeasurably more peaceful and scenic than the city scene of Doğubayazıt ...until the early morning hours of Tuesday May 6th.  We awoke at 2 AM, switched on our headlamps, and dressed in our warmest clothes for the anticipated wind and cold temps of 16°F forecast for our long summit day. We packed sufficient food and water knowing we would be climbing over 5,300 vertical feet (our single greatest summit day altitude gain ever, even more than Everest which is 3,000 vertical feet from camp 4 to the summit). Fortunately we were already well acclimatized after coming from Everest Base Camp at over 17,000 feet just 10 days prior, otherwise I'm not sure I would attempt such a significant one day altitude gain so quickly.

We finally got out of camp at 3:30 AM and followed Mustafa up the increasingly steep snow slope, step-by-step through the dark, illuminated only by our headlamps. After about five hours of climbing in almost complete silence other than the crunch of our crampons in the hard snow or the occasional exchange with Mustafa that consisted of "OK? / OK" or "Good? / Good"), the peaceful calm of the morning was abruptly broken. All of a sudden without any warning whatsoever, we heard an alarmingly loud "BOOM!"  It was the unmistakable sound of a large ballistic artillery round. Who the heck is firing at us way up here on Mount Ararat? Immediately I looked up at the slope above us to assess whether there was a possibility of the missile fire triggering an avalanche? Mustafa responded with a phrase from his English repertoire that we hadn't heard before: "No problem."

Knowing we were only a few miles from the Iranian border, and knowing about history of strife and violence with the Kurdish PKK organization in this area, a response of "no problem" wasn't entirely reassuring. Nonetheless, we continued to climb towards the summit and tried our best to keep warm as the wind and clouds blew against us at 30 to 40 mph at times. Then again, another BOOM! this time followed shortly after by another BOOM! Did we somehow time our vacation with the start of a new conflict with Iran and Turkey or the PKK? The exchange of missile fire continued as we made our way up the last stretch through the clouds and finally to the summit at an altitude of 16,946 feet at 11:00 AM. 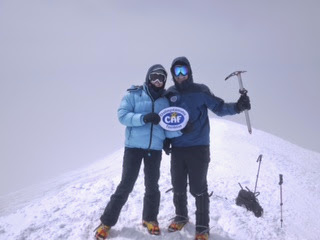 Notwithstanding any of this "unease", our experience on Mt. Ararat and with the Kurdish people has been wonderful and we are extremely happy we stepped out of our comfort zone and embarked on this adventure. Now for a little relaxing, daily showers, and enjoying the sights and Turkish food in Istanbul! 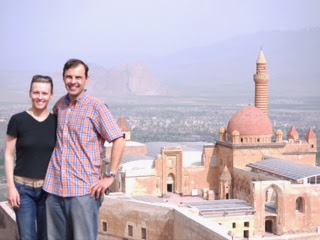 Ishak Pasha Palace, above Doğubayazıt and near Mt. Ararat

Posted by pfejtek at 8:40 AM No comments:

After our celebration dinner in Kathmandu and emotion filled farewells to our Sherpa friends and fellow team members, Denise and I turned our attention to Turkey. We flew to Istanbul yesterday at the western edge of the country (Istanbul is a rare city in the world with the distinction of sitting in two continents) and today we took a flight to Van located near the eastern edge of Turkey. Syria and Iraq are to the south of us and now we are quite near the border of Iran to the east. The Kurds are the predominant ethnic group here so we aren't exactly waving the American flag around to make friends. 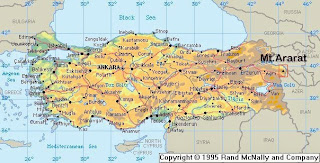 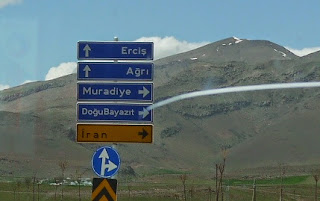 Nonetheless, this region is the site of Mt. Ararat, the highest peak in Turkey at 16,854 feet and its summit is our next objective. It is higher than any mountain in the continental United States or in Europe, outside of the Caucasus. Ararat was a part of Armenia until the Armenian Genocide in 1915 when Turkey took over that section of Armenia. The mountain is a dormant volcano with the last eruption in 1840, so at least we should be safe on that front!

Mt. Ararat is also known for its historical significance as the likely final resting place of Noah's Ark. It is specifically referenced in the Bible in the book of Genesis, Chapter 8, 1-5. Over the years various groups have explored Ararat in the hopes of finding remains of the Ark. Both Josephus in about 70 A.D. and Marco Polo about 1300 A.D. mention its existence on the mountain, but conclusive artifacts have yet to be discovered. If we come across any telltale pieces of wood from the hull, or anybody who looks like Russell Crowe (from the movie Noah) we'll be sure to make another blog post about it! :-)

Although Ararat has a glacial cap year round, most people climb it in August, when there is much less snow on its flanks. As a result we will be using crampons/snowshoes and ice axes far closer to the base of the mountain this time of year in May. Hopefully the weather will cooperate with us as well, it's currently cloudy up on the mountain and looks like snow from here at our current location in Doğubayazıt.  We drove apprx. 2 hours north from Van to get here, and in the morning we will drive a bit further to the trailhead and begin the climb! 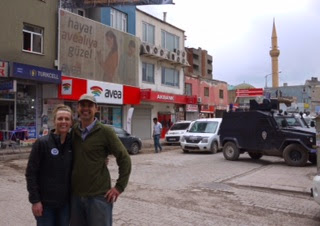 Downtown Doğubayazıt, across the street from our hotel.

Note: We're not sure whether we will have the ability to post from the mountain, so it may be three or four days until our next update.
Posted by pfejtek at 6:07 AM No comments: