Greetings from Huascaran Camp 1 at 16,800 feet where we are huddled in our tent as the wind and snow blows all around us outside. This is our second stormy night on the mountain but we are managing to stay happy, warm, and relatively dry.  We left Base Camp Thursday and had about two hours of somewhat technical "bouldering" with some exposed sections, until we reached Morraine Camp at ~15,500 feet. It was a matter of moments after we set up our tent, that it began to rain, then sleet, then snow.

Fortunately the morning brought clear skies for our continued upward march to Camp 1.  The majority of the climb was on the glacier and we travelled roped together with our guide Nacho who was vigilant to avoid any dangerous crevasses. We arrived at Camp 1 around 3 pm and like clockwork the dark clouds moved in and it began to snow again. 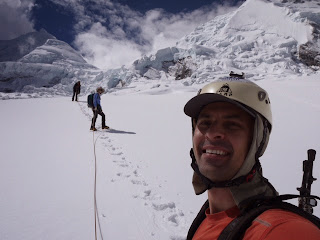 We have a rest day and one more night scheduled here at C1 to adjust to the altitude of nearly 17,000 feet, and then we will make our way up and through the "Canaletta." This is one of the more dangerous parts of the route, similar to a mini version of Everest's Khumbu Icefall with seracs hanging above that could come crashing down without notice. However, Nacho and one of the other guides we spoke with felt the Canaletta looked ok this season, but we will be safe and of anything looks too risky we will turn back. Until next time...
Hasta la Vista,
Pablo y Denise
Posted by pfejtek at 8:41 AM No comments:

After acclimating in and around Huaraz the past few days, our expedition to Peru's highest peak, Nevado Huascaran, has now officially begun! We drove north this morning about an hour and a half to the tiny mountain village of Musho where we packed our gear and eight days worth of food onto donkeys. We began hiking at 10,000 feet and enjoyed the fabulous views surrounding us and the imposing slopes and glaciers of Huascaran high above. We followed our skilled guide Nacho, at a leisurely pace and approximately four hours later we arrived at our current location at Base Camp at apprx. 13,700 feet. Our tents are situated near a picturesque stream, we are feeling good, and are looking forward to a nice meal being prepared by our cook Hernan.

We thought you might also enjoy learning a little background on the single most notorious event in Huascaran's history, as many people here talk about it. In 1970 a 7.9 magnitude earthquake triggered a massive avalanche causing a 3,000 foot wide section of the mountain and glacier to break off and slide 11 miles down the slopes below. The towns of Yungay and Ranrahirca were entombed in 40 million cubic meters of debris and more than 20,000 people were killed, including all 15 members of a Czech climbing team who were on the mountain at the time.

Well, that's it for now, we will do our best to send updates later as we are able. We are thrilled to have a cellular data connection, but it is painfully slow - therefore sorry no photos.
Adios!
Posted by pfejtek at 3:58 PM No comments:

Posted by pfejtek at 7:21 AM No comments:

Ambitious Adventure to the Andes 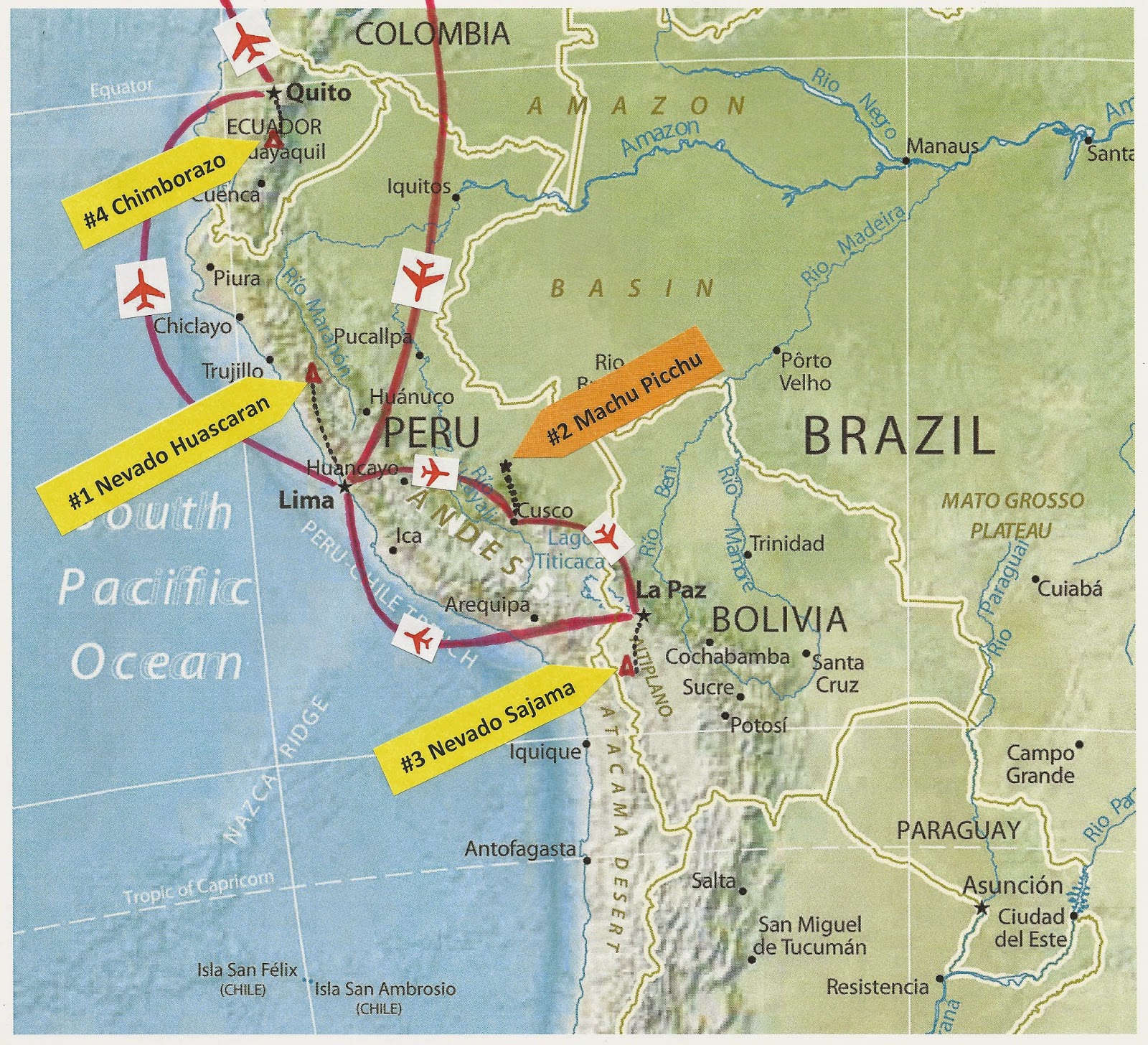 …one of our most ambitious climbing adventures yet (certainly from a logistics standpoint) and it all begins this Thursday! In our quest to explore new and exciting high altitude destinations for future Step Outdoor Adventures programs, we are heading south to Peru, Bolivia, and Ecuador. Our plan is to climb the highest mountains in each of those countries – Nevado Huascaran: 22,262', Nevado Sajama: 21,590' and Chimborazo: 20,681'.  Each one is higher than the highest peak in North America, and Huascaran is less than 600 vertical feet shy of Aconcagua, its less technically challenging neighbor to the south and the highest peak in the world outside of Asia.

During our journey we will also visit some spectacular sights along the way like the Inca ruins at Machu Picchu (located at a comfortably lower altitude of ~8,000') and the beautiful Lake Titicaca, the highest navigable lake in the world. We’re not sure if our bodies will hold up to such an active itinerary, or if we can actually pull off all of this, since it seems like we just planned an episode of the Amazing Race. Nonetheless we’re super excited for the adventure, and also enthused to be delivering two customized wheelchairs to some deserving challenged athletes in Lima along the way! 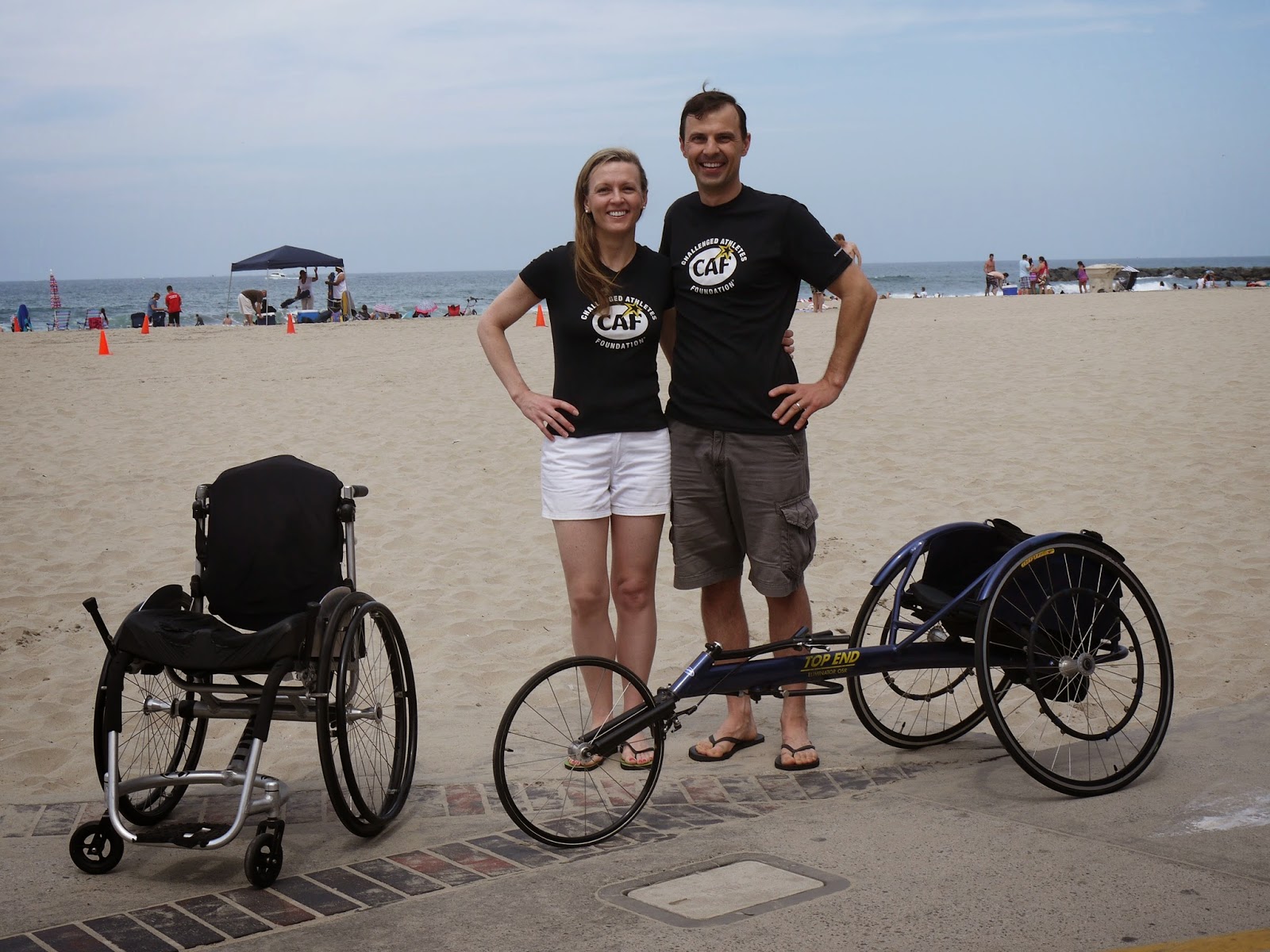 We would love to have you follow along on our “Ambitious Adventure to the Andes” to see how it all unfolds. So if you're not already receiving e-mail updates when new posts are made, please subscribe by entering your e-mail address in the box in the upper right portion of the blog post (and don't forget to verify through the automated email you will receive immediately after subscribing - check spam filter if you don't see it).
Adios y Hasta Luego!
Paul y Denise

Posted by pfejtek at 8:27 PM No comments: