We are 19 days away from departure for our grand adventure of the never-before-climbed Burke Khang!  This post summarizes our planned itinerary to reach an area where we intend to set up Burke Khang Base Camp, and a subsequent post will describe our proposed climbing route.

Although this will be our fourth trip to Nepal, we anticipate the capitol city of Kathmandu will look and feel very different to us since the devastating 7.8 magnitude earthquake left its deadly mark on the country earlier this year on April 25th.  We will spend a night in Kathmandu and early in the morning on Oct. 22nd we plan on flying to Lukla, a tiny village carved into the mountainside at 9,350 feet. Lukla is the launch-point for Everest expeditions and treks. The Tenzing-Hillary Airport at Lukla is rated the most extreme in the world because of its short, uphill runway, and challenging topography.  From Lukla, we will move up the Everest Base Camp trekking trail to the famous village of Namche Bazaar, the gateway to the high Himalaya and the main trading center and hub for the Khumbu region.

After spending two days in Namche, we will leave the EBC trekking trail and make our way up the less frequently traveled Gokyo Valley.  We visited this region on our first trip to Nepal in 2008 and will be stopping in the same villages of Dole and Machhermo along the way to sleep and acclimatize. After four days of trekking, we will arrive at the village of Gokyo and spend an extra day relaxing and acclimatizing at the beautiful Gokyo Lake and enjoying the spectacular scenery.


From this point forward, the hard work begins.
Our next blog post will describe our proposed climbing route so please stay tuned.  Thank you Bill Burke for allowing us to use some of your images and text, and most importantly thank you once again for inviting us to be a part of this historic first ascent expedition team!
Posted by pfejtek at 6:34 AM No comments:

It's true, an extremely rare opportunity has been granted to us to become the first-ever in history to climb the 22,775-foot Burke Khang in Nepal!  We have the great privilege of being friends with Bill Burke (the oldest non-Asian person to summit Mt. Everest at age 72) and he invited us to be part of a small team to attempt climbing his namesake mountain!  And we leave for Kathmandu next month on October 19th!

Last year the Government of Nepal and its Prime Minister bestowed the incredible honor upon Bill by naming this unclimbed peak after him.  Burke Khang (Khang means mountain in Nepalese) sits on the border of Nepal and Tibet approximately 9 miles west of Everest.  It is among a group of peaks that were previously off limits to climbing, but on May 21, 2014 the Government of Nepal granted access to these areas for the first time in history.  Our expedition has been in planning stages for more than a year now and very few days have gone by without us thinking about this exciting adventure!

We have purposely been keeping our plans under the radar until now as a precaution, since making a first ascent of an unclimbed peak can be competitive business.  Particularly in the international climbing community, the Russians, the Chinese, and Japanese are always eager to go after these conquests.  Nowadays there simply aren't that many big mountains left in the world that haven't already been climbed.  The idea is a bit crazy for us to imagine being in the company of true climbing pioneers who have made first ascents: Sir Edmund Hillary, Tenzing Norgay, Reinhold Messner ...and perhaps - Paul and Denise Fejtek!?!?

We will be climbing alongside another mountaineering great, our expedition leader Garrett Madison. Renowned as one of the world's top high-altitude mountaineering guides, among other accomplishments Garrett has guided 6 successful Everest expeditions, led a team to the summit of K2 last year, and is frequently sought after as an expert in the field. 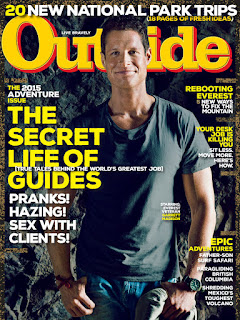 Garrett joined Bill Burke for a helicopter reconnaissance of Burke Khang in April to determine if the mountain was climbable.  Back in January, Bill hired two Sherpas to scout out possible routes but they came back saying the mountain was too steep and avalanche prone.  Bill wasn't ready to give up so he poured over satellite imagery of the mountain on Google Earth and thought he found another way.  This is Bill's unlisted video showing stunning shots of our proposed ascent route as well as remarkable footage of Everest Base Camp and the infamous Khumbu Icefall.  The video and photos were taken by Bill, Garrett, and NBC cameraman Michael Churton,  just two weeks prior to the tragic earthquake on April 25th that devastated Nepal and triggered the avalanche that wiped out Base Camp and sadly took 18 lives there.


In the aftermath of the earthquake we debated cancelling the expedition.  Climbing a mountain seemed like such a discretionary pursuit given the death and destruction that overwhelmed Nepal. Instead we shifted our attention towards providing funds for immediate relief efforts. With your support the 100 Mile Race to Help Nepal was a huge success with over $18,000 going to CAF and to Nepal earthquake relief.  Nepal is beginning to recover from the natural disaster but their economy relies heavily on tourism.  As time passed we realized the best thing we can do to further help our friends in Nepal, is to just go ahead with the expedition!  We feel good about spending our strong U.S. dollars in their lodges & restaurants, and hiring local staff to provide the means of support and self-sufficiency the people of Nepal truly desire right now.

Please stay tuned for the next blog post with more details about our adventure, the climbing route and other exciting particulars. If you aren't already subscribed to our blog, you can get updates whenever a new post is made by entering your email address in the box at the upper right of the Summit for CAF blog page (and don't forget to verify through the automated email you will receive immediately after subscribing - check your spam folder if you don't see it).
Posted by pfejtek at 10:56 PM No comments: