The rest of the story... As told from Hong Kong during a few days layover to visit Disneyland and to hike Tai Mo Shan (Hong Kong's underwhelming high point at 3,140 feet).

...back to Nepal at over 20,000 feet on our summit day Nov. 3rd.  Garrett Madison's dispatch referenced in our last post explained many of the details of our big day on Tharke Khang, so without repeating his excellent summary, here's what else happened from our perspective.

The entire team had been pushing hard and ascending more rapidly than scheduled in the days leading up to our summit day. This was in part because we were feeling strong, and mostly due to the helicopter transporting us over the Ngozumba Glacier and icefall directly to ABC at 19,000 feet, gaining 2,500 feet in a matter of minutes. Nonetheless we had a good weather window to go for the summit so we all rallied and sucked it up, both figuratively and literally considering the limited oxygen in the air at this altitude. As an aside, this shorter than ideal acclimatization period makes the success of those who reached the summit even more impressive.

Denise was feeling much less energetic than usual when we left camp shortly after 2 AM.  But with some positive spousal encouragement and the help of only mild winds and illumination from the moon, we slowly and steadily climbed the steep wall up to the corniced ridgeline at just over 20,000 feet. It was at this point where Denise decided she didn't have enough gas in the tank to safely navigate up and down the rest of the treacherous ridgeline ahead. As much as I hated doing so, I gave her a kiss goodbye and watched her as she clipped her figure 8 onto the rope and began her rappel back down. Sid was waiting for me on top of the ridgeline and as soon as I climbed up over the lip, we both watched carefully to make sure she descended safely. We then continued on and quickly caught up to the others. It was at this point when Phil decided his risk meter was nearing its limits, so he turned back as well. Again Sid and I stopped and waited to watch from this last vantage point to make sure he also descended safely. Then it happened.  I believe my words were "HOLY SHIT!" Phil just slipped and fell! I wouldn't have predicted this event as Phil seemed to be a very skilled and experienced climber. Sid and I watched helplessly as he began sliding down the extremely steep and sustained headwall slope that we spent all morning climbing up (well over 1,000 vertical feet). The chances of surviving an unprotected fall from here were slim. Fortunately Phil was properly clipped into the safety line and it held his weight when the full force of his body tugged on the rope. Disaster averted.

Sid and I refocused our attention on the steep slopes above us and the vertical wall that would soon become my nemesis. I'll spare the technical discussion why a safety line should be rigged slightly longer than an ascender leash (something I should have paid more attention to earlier) suffice it to say I got hung up on the overhanging section of the wall as I tried to climb up. It required Sid's expert guiding skills to extract me from my predicament - thank you again Sid. Once the pressure was relieved from my carabiner I was ready to go! Unfortunately at that point so was Sid.  He made a comment about some adage in mountain guiding that you're allowed one "F-up" but not two. We already had our close call with Phil, so as far as Sid was concerned it was time to go back down and quit while we were still ahead. Despite my strong desire to continue on and achieve a first ascent with Garrett and the others, I respected Sid's professional call to turn around. After all that's why we hire experienced professional guides who can make difficult decisions like this and help keep us safe. Of course guides are human and capable of mistakes as we all know, but far better to be conservative when lives are at stake.

It was not lost on me that in my hand was Scott Fischer's ice axe, a constant reminder that things don't always go as we hope or plan in the mountains (or in life) but that's exactly what makes for a great adventure!!! 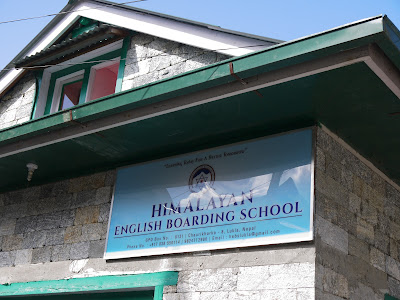 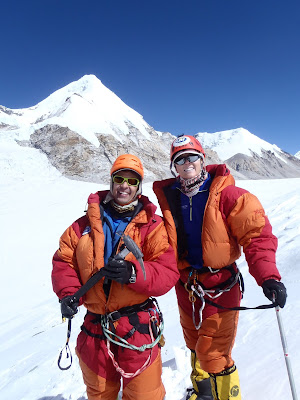 ​We are thrilled to report that a successful first ascent of the unclimbed "Secret Mountain" Tharke Khang has been achieved! Sadly we were not among the three Westerners to stand on the top out of the total nine clients and guides on our team, but we are elated to be a part of the remarkable effort to reach the objective and climb where no humans have ever gone before. We hope Scott Fischer wouldn't be too disappointed that we were unable to get his ice axe to the summit, but I'm sure he would appreciate we all got down safely. A special thanks to our friends Aang Phurba Sherpa, Lakpa Dandi Sherpa, Tashi Sherpa, and Pasang Dawa Sherpa for your hard work and helping to keep all of us safe on a difficult, demanding and extremely treacherous peak. We knew very little about this mountain before setting foot on its flanks, and without your machine-like efforts, this pioneering feat could not be attained.

﻿
We are proud of the decisions made high up on the mountain that lead all of us to safely return to tell the tales. Garrett Madison did an excellent job recounting the details of our summit day that began at 2:00 AM on Friday Nov. 3rd, coincidentally Garrett's birthday. I highly encourage you to read his Madison Mountaineering dispatch and see the photos to more fully appreciate what took place and what was accomplished:
http://madisonmountaineering.com/team-summits-unclimbed-peak/
Happy Birthday once again GM, we can't imagine a better gift for such a strong and selfless professional guide than your very own first, First Ascent on your birthday. You will not read this in Garrett's dispatch because of his humble nature, but Garrett previously decided when we were at base camp on Wednesday to defer leading the final stages of the climb to our two other Western guides, giving them the opportunity to claim the first ascent accolade. For a professional mountain guide the accomplishment is the equivalent of a lifetime achievement award or perhaps a Presidential Medal of Honor. When we heard of Garrett's decision to put all self-interest aside and defer the opportunity, we were stunned. After much debate among the team we were able to persuade Garrett to come along as previously planned. We're glad we spoke up and the decision was made, and I'm sure that now in retrospect the GM is pleased too.
Among many life lessons we have learned on this amazing adventure here in Nepal, the Buddhist doctrine of Karma is a powerful force. Thank you Garrett for demonstrating to all of us through your actions how good karma really works. 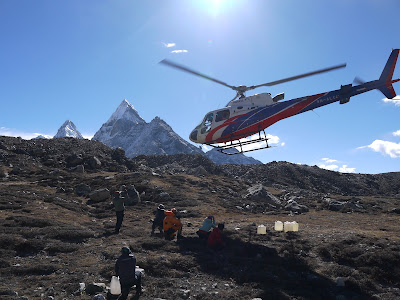 In my next blog post I'll elaborate a bit on difficult decisions made and why we turned around before reaching the summit. But for now we want all of you to know we are safely off the mountain and thanks to the miracle of helicopter transportation, we are already back in Kathmandu and once again enjoying the conveniences outside the expedition tent including fresh food, shower, bed, and an internet connection. ... not to mention the extra oxygen we have been missing out on above 20,000 feet! We also want you to know how much we appreciate all of you for following along on our adventure and for your support and friendship.
Thank you,
Paul and Denise Fejtek
http://StepsToTheSummit.com
Posted by pfejtek at 4:20 AM No comments: