With Grossglockner in our rear view mirror we headed south and in less than two hours we crossed the border from Austria into Slovenia.  Our next adventure - Triglav the highest mountain in Slovenia and also the highest in former Yugoslavia before Slovenia became an independent nation in 1991.

The impressive prominence of the peak and near vertical limestone walls are a sight to behold and a source of pride for Slovenians.  The fact that Triglav is featured on the nation’s flag is testament to its importance to the country.  The former Slovene president Milan Kučan once proclaimed that it is a duty of every Slovenian person to climb Triglav at least once in their lifetime.  And this is a tall order considering the physical and mental strength required to scale the steep and exposed faces necessary to reach the top.
Similar to Grossglockner, Triglav has many more cables or “via ferratas” bolted into the rock to which carabiners can be clipped in for safety.  Without them one would need nerves of steel like Alex Honnold in Free Solo to climb this without protection. Of course he would scramble up this like a mountain goat playing tag and laughing with his mountain goat friends.
Also just like our last climb, we threaded the weather needle and woke up in our quaint mountain hut to clear skies and a fresh blanket of snow covering the upper mountain.  We slept at the Aljažev dom in the Vrata Valley in order to have early access to our chosen route called Tominšek.  It’s considered the the most beautiful and classic Triglav route, but by no means the easiest.  We were climbing adjacent to the massive and imposing North Face and due to the sheer steepness, we were ascending at a rate of ~1,000 feet per hour for several hours straight.  With the aid of the via ferrata cables we were able to climb much faster without the need to set up ropes and belay each other up the numerous exposed sections.  We did not take a guide with us as we heard the route was well marked (it was) and the cables provided a good visual as well. 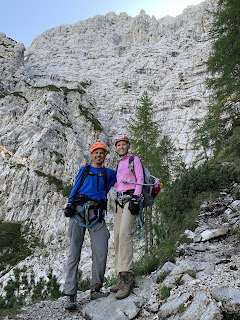 As we approached the next hut where we would spend the night, the Triglavski dom na Kredarici at 8,252 feet, we encountered others on the way down. One after another they reported they couldn’t reach the summit because of too much snow and no crampons.  Helga, Denise and I all looked at each other with regret of our decision to leave our crampons behind in order to save the weight in our packs.  Our only hope now was that the warming temperatures of the day would melt the snow enough to allow some traction for our boots.  ...either that or we would have to send Helga back down with her long legs to retrieve our crampons! :-) 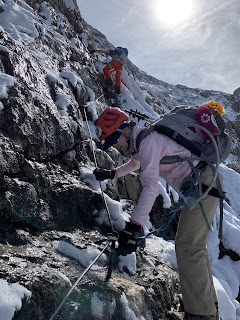 We also came to the realization that the partially melted and packed snow would freeze overnight and become an ice skating rink by morning.  So, we decided to change our plan of only hiking to the hut for the day, and instead go all the way and attempt the summit in one long push. We then encountered a French climber descending from the top and he said he was able to do it without crampons.  Encouraged, we marched onward and reached the first of several icy cable sections where we clipped in and treaded cautiously. It was slow going at times but after 8 1/2 hours and almost 6,000 vertical feet, we reached the summit of Triglav, at 9,396 feet the highest point in Slovenia!

After our celebratory photos raising the Challenged Athletes Foundation flag, we headed carefully back down the ridge for ~2 hours to the Triglavski dom high hut. Here we enjoyed a hot meal and a well-deserved rest before heading all the way back down the next morning.  Slovenia and the Triglav National Park have truly been a remarkable place to visit and we hope to return again to this wonderful country. 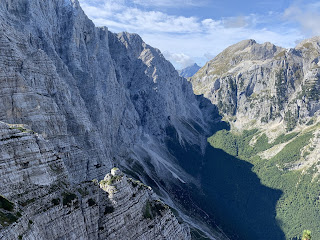 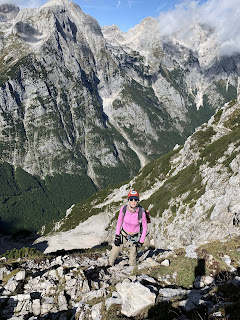 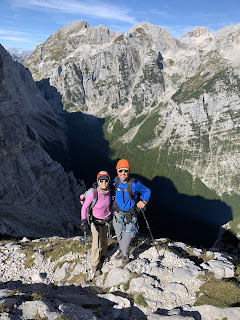 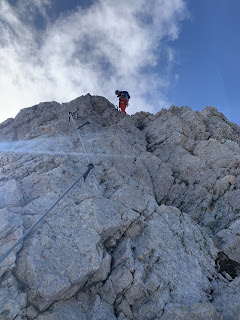 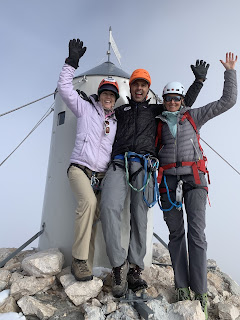