First and foremost on our Himalayan First Ascent attempt:  All remaining members of our team are safely off the mountain, happy, healthy, and hungry!  We made it within 500 feet of the summit and despite some of the best guides and Sherpas in the world supporting our effort, it would have been suicide for any of us to attempt the final corniced, seraced stretch to the top. Perhaps Burke Khang will never be climbed and maybe it's meant to be this way? Nonetheless this has been without question, the most exciting, challenging, nerve-racking, emotional - yet fun, meaningful and memorable adventure of our lifetimes!

The wind was violently shaking our tents all night at C1 and presumably the same for Bill, Sid, and Phurba Ridar who were all hunkered down 1,400 feet higher in a lone tent at C2.  The planned summit departure for Garrett, Nick, Denise and me was 2:00 AM Tues. Nov. 10th.  At 1:30 AM I awoke to see a noticeably disturbed and tormented look on Denise's face. She told me she had been wide awake all night and felt the risk wasn't worth the reward and she decided she wasn't going up.

I was devastated, we had always climbed together as partners. Was I supposed to stay too? Forgo this once-in-a-lifetime first ascent summit attempt? Meanwhile Bill was at C2 and I was concerned about him as well.  He didn't look good at all when he left the day prior, he wasn't nearly as sharp as usual, and it took him all day struggling to get from C1 to C2. 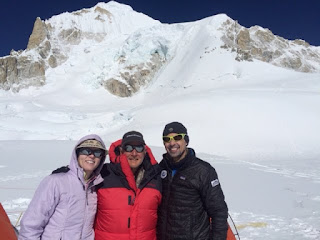 I know how determined of a man he is, and he might likely keep climbing until he used every ounce of fuel in the tank. If he ran out near the top, he might never come back. At least that was my fear, especially with the extreme technical, steep, and dangerous climbing on this mountain.

I had to go, and leave Denise behind. It took nearly an agonizing hour for me to make this decision. Meanwhile Garrett and Nick had their boots, crampons, climbing harnesses, helmets, and headlamps on.  They started up the route around 2:30 AM.  Before he left, Garrett told me Lakpa would climb with me.  I didn't know Lakpa, I knew and trusted DaOngchhu from climbing together on Everest, but he was gone, helicoptered out because his father was sick. The entire situation was less than ideal (it sucked).

At 3:12 AM I said my emotional farewell to Denise, gave her a hug and kiss and promised her I would be safe. My gut was wrenching as I turned away from the tents at C1 (leaving Denise as the only person occupying this desolate high-altitude outpost).  I began climbing up towards the most difficult, rocky, icy, exposed terrain I had ever encountered on any mountain in the world. For perspective this includes Everest and all of the Seven Summits, along with the Matterhorn and the highest mountains in 13 countries.

The wind continued to blow as it had been all night, it was pitch dark, there was no moonlight, my crampons scraped against the rock and struggled to bite hold.  Even though Lakpa was climbing behind me, I was effectively alone. I was legitimately scared. Without Denise by my side I was no longer climbing for fun, no longer motivated by making an historic First Ascent of Burke Khang. I didn't care about Burke Khang at all.  I did care about my friend Bill Burke, and I cared about my own survival, and making sure I would return to C1 and be reunited with Denise again.

...sorry for the overly lengthy update, we are going to go eat now, I'll share the rest of the story in another post.

Very glad that everyone is safe! The post is not at all overly long, Paul. In fact, it reads like a mystery/thriller. Looking forward to hear about the rest of the adventure. Hugs to both of you.

Great news to hear that you, Denise and everyone in the expedition returned safe and sound. What an incredible adventure. Can't wait to hear part two. Again, so happy to hear that you are safely back in the lowerlands. Take care of yourselves!