Update from Advanced Base Camp (ABC): We made it here yesterday as planned but it was not without challenges. We started the day off early and rappelled 500 feet down a steep wall into the heart of the Ngozumba Glacier. Making our way across this mile-wide junk yard like collection of loose boulders stacked on top of moving ice, was an ordeal unlike we have ever encountered in all of our previous mountaineering experiences - and we have been on many glaciers around the world.

Fortunately we managed to stay sure footed and avoid sliding down with the frequent rock slides triggered by our steps. It required a tremendous amount of concentration and mental energy but at least we were rewarded with stunning scenery of Everest and other giant Himalayan peaks towering above us the entire way.

We were blazing a trail that few (if any) others besides our advance Sherpa team have ever traveled, and after nine hours we finally arrived at ABC.  The elevation here is 18,100 feet, a bit higher than we previously estimated, and it is cold!  (single digits at nighttime). The shorter days and longer nights definitely make a November climbing attempt more frigid than a typical Spring season expedition, when Everest is usually climbed. Nonetheless we are happy to be here at ABC and have front and center views out of our tent door of Burke Khang and our climbing route to the summit!

Unfortunately the taxing day required to get here took its toll on Kathy. She had been battling respiratory issues and yesterday's physical exhaustion only made it worse. Like Bud and John before her, Kathy made the difficult decision to abort her First Ascent attempt of Burke Khang and she asked Garrett to make a satellite call for a helicopter. Around the same time this morning Da Ongchhu Sherpa (who was our climbing Sirdar on Everest in 2010 and who we made a special request to be on this expedition) received some troubling news. His father was in the hospital in Kathmandu for a ruptured appendix and he was in critical condition. Da Ongchhu decided to join Kathy on the helicopter and we sadly waved goodbye to both as they lifted off en route to see their respective loved ones. 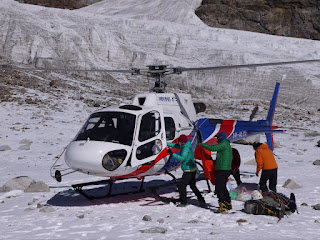 Losing two more members of our team is difficult for many reasons, but fortunately we still have excellent support for the climb in Garret, Sid, and our remaining climbing Sherpas.
We are still on the schedule as described in our last post and plan to leave ABC early tomorrow morning Sat. Nov. 7 Nepal time for C1.  This will be an extremely steep and difficult climb ascending the buttress and we will generally be following the red line as originally pictured in our blog post from October 12 entitled Burke Khang - Climbing Route. We may or may not be able to make another post from up high, but if you don't see one, you can always check Bill Burke or Madison Mountaineering's blogs as they may call in from satellite phone in the coming days (links on upper right side of our Summit for CAF blog site).
Wish us luck!
Paul & Denise

Best of luck Paul and Denise! Be safe. We are following your posts closely and with great excitement. Happy to see that you are able to get out so many updates.